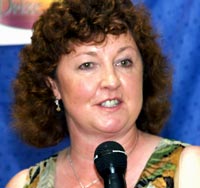 Suzanne Kenny as she was known as back in the '70s joined Portumna Golf Club in 1976, her father Eric himself a low handicapper golfer was a major influence on her love for the game  She had her first real success with the Independent Mixed Foresomes in 1979 when they reached the All Ireland Semi finals before losing to Birr, this was Portumna's first breakthrough in any of the GUI Inter-club Competitions.  Suzanne also won her first Lady Captains  prize that year playing off 18. She received her first Inter pro cap in 1987 and has  played for the Province 21 times including this year in Royal County Down where Connaught beat Leinster for the first time. She  won two Scratch Cups, at the Curragh GC and Ballinasloe GC and also a Midland Championship in the Curragh.Runner up on two occasions in the Connaught Championships. Played in the Ulster Bank fourball in its inaugural year 1996 when Portumna won it ( she  was 7 months pregnant at the time)and also the next year when we retained our title. We won again in 2009. Suzanne  was the first Portumna lady to be elected to the Connaught District executive in1995 and is now District Chairman (another first for Portumna).

Suzanne won two more Lady Captains in 2004 and 2007. In all her wins she was the lowest handicap lady in the club. Suzanne qualified in the top 8 of the Ladies Seniors Close in Ardee earlier this year and came joint 8th in the ladies Senior Strokeplay in Greenore a few weeks ago out of a field of 76 players from 11 different countries. Playing the Senior Home Internationals in Tramore from 28th to 30th September.
Suzanne is and always has been an excellent Ambassador for Portumna Golf Club, is an example to all young players coming through the novice stages and shows that practice and dedication to the game pays off, she is a pleasure to watch on the course.

We wish her well in Tramore in two weeks time.